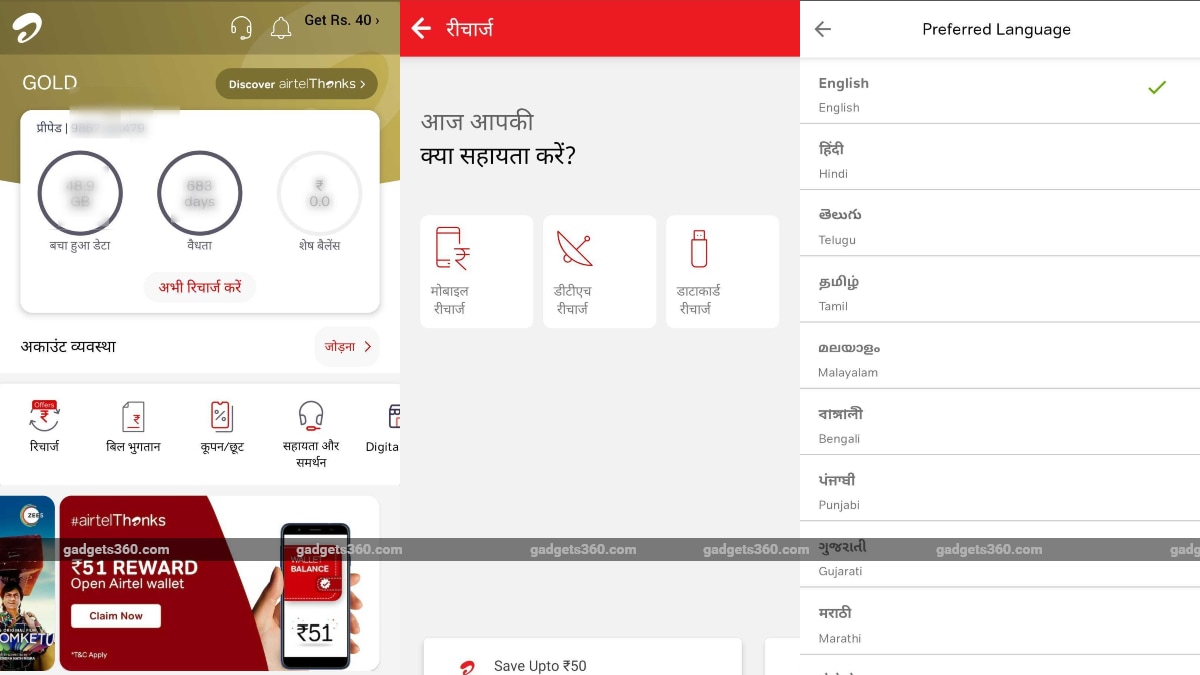 Airtel Thanks app has introduced support for several regional Indian languages to allow customers from different backgrounds to access the app with ease. The app has received support for Hindi, Telugu, Bengali, Marathi, Tamil, Gujarati, Malayalam and Punjabi languages. The rollout of these new languages has been announced for Android users right now. Airtel notes that iOS app users will get the regional languages support shortly. Furthermore, the telecom operator has also confirmed that other regional languages like Kannada, Assamese, and Oriya will be introduced in the coming weeks.

The new regional languages support inside the Airtel Thanks app will help ease the customer experience when using the app. The app language can be changed easily by going to Settings > App Personalisation > App Language > Select Desired Language. The current supported languages, as mentioned above, include Hindi, Telugu, Bengali, Marathi, Tamil, Gujarati, Malayalam and Punjabi.

Airtel says that 35 percent of Airtel Thanks app users come from tier 2 and tier 3 towns and rural markets. This vernacular language support looks to help these customers, in particular. This new addition should help these subscribers navigate easily through the app, recharge their accounts, or browse through any of the other services that Airtel offers.

Among other telecom operators, the MyVodafone app currently only supports English and has Hindi language support in beta. MyJio also supports just English and Hindi languages. MyIdea, on the other hand, supports four languages – English, Hindi, Marathi, and Malayalam.

The Airtel Thanks app not only offers account and recharge details, it also lets subscribers pay utility bills and recharge prepaid packs. As part of the Airtel Thanks campaign, the telecom operator segregates its customers into Silver, Gold, Platinum – based on their ARPU. Platinum users get the maximum benefits while Silver users are offered the least.

The Airtel Thanks app also offers online customer care support to subscribers for any plans or network related issues. Apart from this, users can also see live TV channels, and gain access to a range of movies and TV shows.