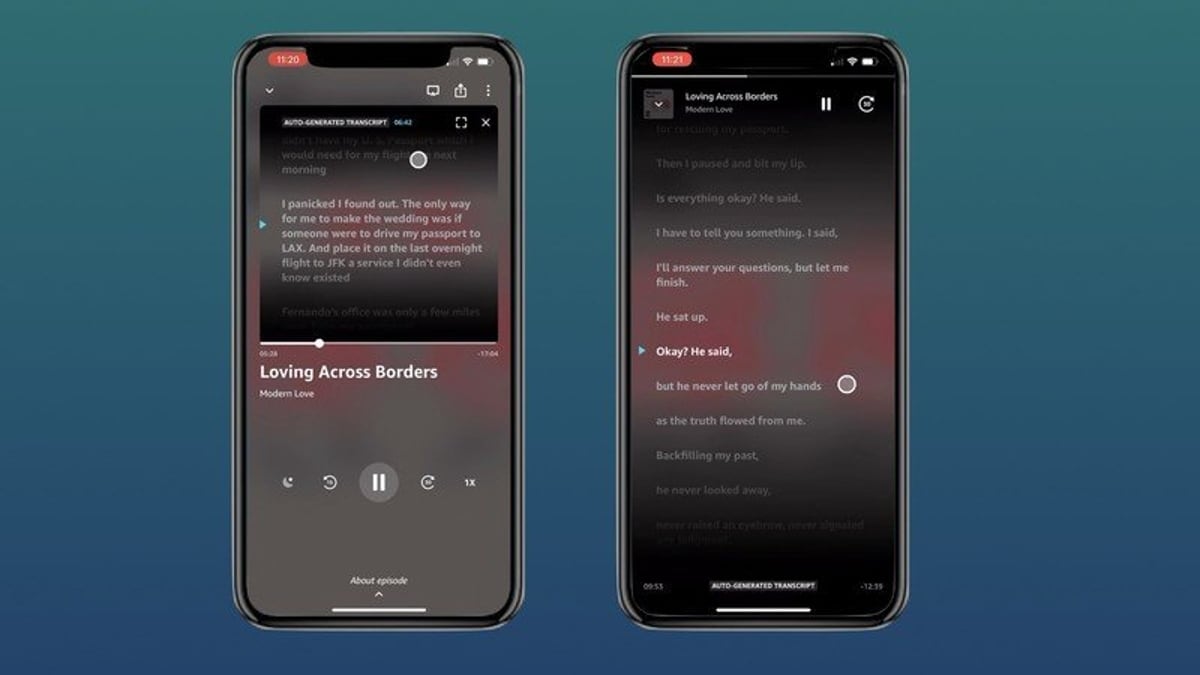 Amazon Music has started rolling out automatically generated, synchronised transcripts for select podcasts. The new experience is initially coming to the US for both Android and iOS users. It is also the first biggest podcast-focussed update after Amazon Music started serving podcasts through its platform last year. By offering auto-generated, synchronised transcripts, Amazon Music will make it easier for people with hearing disabilities to listen to the podcasts offered by the music streaming service. It is also a move to take on the likes of Spotify and Google Podcasts that are offering auto transcription of podcasts on their platforms to some extent.

If you are in the US, you can start reading synchronised transcripts of select podcasts on Amazon Music by going to the podcast tab and pick one of the supported episodes. The transcription will be available for viewing in both full-screen and on top of the album art.

Introducing: Podcast Transcripts. Roll it back, jump ahead and follow along with synchronized transcripts and audio, only available on Amazon Music. Head to our podcast tab and select episodes with transcripts to check it out! pic.twitter.com/A5d0aA0rvJ

Amazon General Manager for Podcasts Kintan Brahmbhatt tweeted to add that the transcription feature has initially been designed for popular podcasts, including Smartless, Crimejunkie, 9/12, Uncommon Ground, and Modern Love. You can, however, expect synchronised transcripts to be available for other titles over time.

The Verge reports that the auto-transcription feature used by Amazon Music will not transcribe ads. It will just show the text in that case to say, “audio not transcribed.”

For the last few months, Amazon has shown a massive interest in podcasts to broaden the coverage of Amazon Music in the market. It acquired podcast network Wondery last year to start its podcast category that was initially live in the US. Earlier this year, Amazon Prime Music also launched podcasts as a dedicated category in India.

Details about the rollout of auto-generated transcripts for podcasts on Amazon Music in India are yet to be revealed. Nevertheless, the feature is likely to come to the Indian market over time — given the popularity and growth of podcasts in the country.

Similar to Amazon, Spotify in May announced a beta rollout of its synchronised transcripts for Spotify Original podcasts. The company also said that it would be rolled out to all podcasts on its network in the future.

Google Podcasts, on the other hand, doesn’t have transcripts ready for the end users at this moment, though it transcribes each episode people upload on the platform using a native service for an enhanced search functionality.

In contrast, Apple Podcasts has not yet announced an in-house solution to offer auto-generated, synchronised transcripts on its own. It, however, does allow creators to transcribe their shows and have the text included in their show notes that can be visible to listeners.

According to Deloitte, podcasts around the world are predicted to become a $3.3 billion (roughly Rs. 24,570 crores) business by 2025. KPMG, in a separate report, mentioned that alongside global markets, the COVID-19 lockdowns in India boost the growth of podcasts as their listenership in the country increased by as much as 30 percent.

All this has convinced Amazon — among other key players — to start giving newer experiences to both creators and podcast listeners in the market.