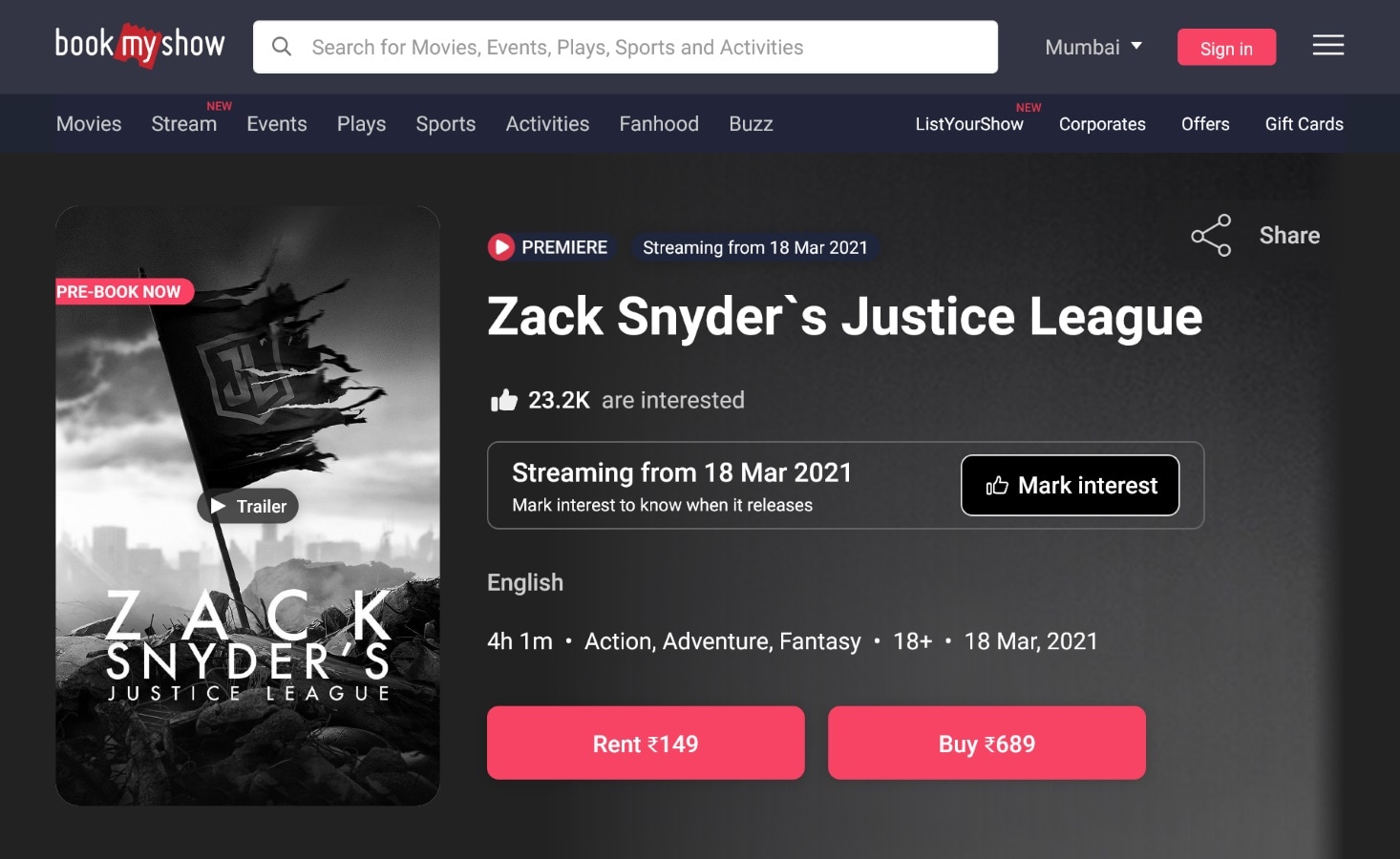 Justice League Snyder Cut will cost Rs. 149 to rent and Rs. 689 to buy on BookMyShow Stream, the ticketing platform has announced. Pre-orders are now live. We also have the exact release time: Zack Snyder’s Justice League will be available March 18 at 1:31pm IST. Pricing is not yet available for any other platforms — including Apple TV, Google Play/ YouTube, Hungama Play, or Tata Sky — but I’d expect it to be in the same ballpark. Warner Bros.’ other recent releases, including Tenet and Wonder Woman 1984, cost Rs. 120 to rent on Hungama Play, Rs. 150 to rent on Apple and Google platforms, Rs. 690 to buy on Apple TV, and Rs. 720 to buy on Google Play. Hungama Play doesn’t allow movie purchases, and that will also be true for Justice League Snyder Cut, it told Gadgets 360.

While Justice League Snyder Cut will be available in 4K HDR (including support for HDR10 and Dolby Vision) on HBO Max in the US, BookMyShow Stream is limited to HD video quality. BookMyShow is also limited to Dolby Digital 5.1 surround sound, unlike Dolby Atmos on HBO Max. In India, Apple TV has the largest 4K and Atmos catalogue, followed by Google Play, so it remains to be seen if either of them will offer Justice League Snyder Cut in pristine 4K HDR with all bells and whistles — as Zack Snyder intends it to be seen. Both Apple and Google offer 4K and HD at the same price, so you don’t have to worry about paying more for the best version.

Determined to ensure Superman’s (Henry Cavill) ultimate sacrifice was not in vain, Bruce Wayne (Ben Affleck) aligns forces with Diana Prince (Gal Gadot) with plans to recruit a team of metahumans to protect the world from an approaching threat of catastrophic proportions. The task proves more difficult than Bruce imagined, as each of the recruits must face the demons of their own pasts to transcend that which has held them back, allowing them to come together, finally forming an unprecedented league of heroes. Now united, Batman (Affleck), Wonder Woman (Gadot), Aquaman (Jason Momoa), Cyborg (Ray Fisher) and The Flash (Ezra Miller) may be too late to save the planet from Steppenwolf, DeSaad and Darkseid and their dreadful intentions.

Update (7 March 12am): BookMyShow clarified that it will offer Dolby Digital 5.1. Still no word on 4K/ HDR support.