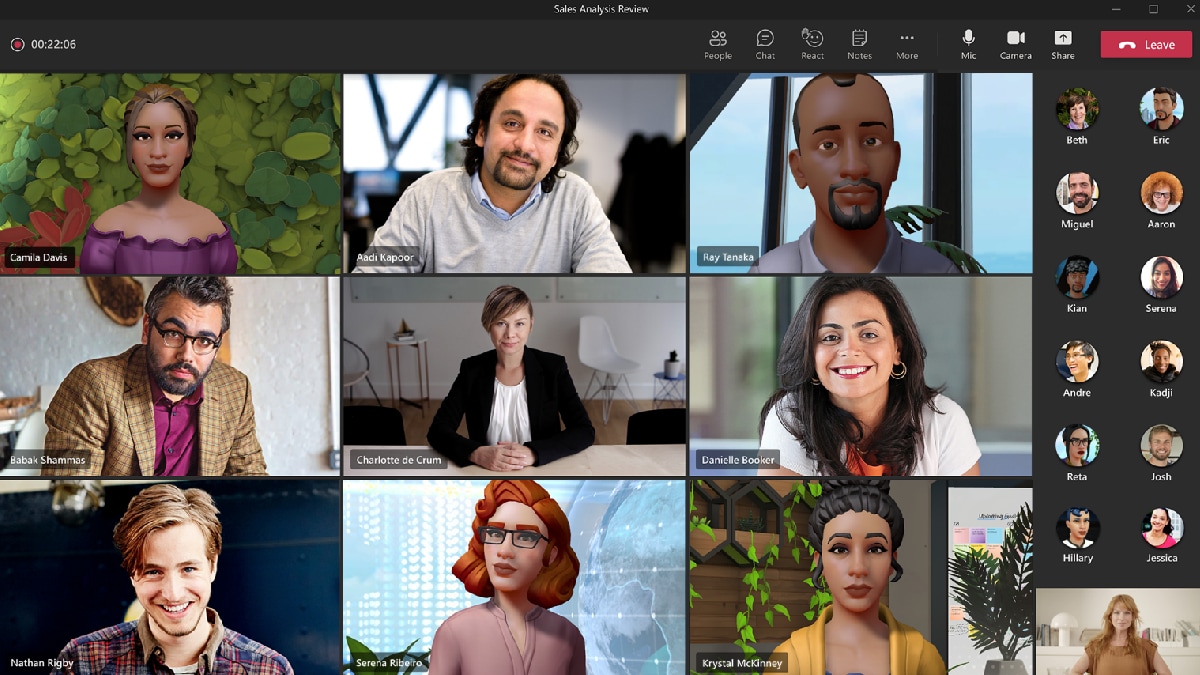 Microsoft Teams is getting 3D virtual avatars and environments on the platform as part of the tech giant’s push towards to enter the metaverse. As hybrid work is happening around the globe, Mesh for Microsoft Teams will let people in different locations join collaborative and shared holographic experiences with productivity tools of the video-calling application. People will be able to join virtual meetings, send chats, collaborate on shared documents, and more. Microsoft says the Mesh platform will let people meet in the virtual space without having to switch on their webcams

Microsoft at its Ignite 2021 conference, announced Mesh for Microsoft Teams. Mesh for Teams will start to roll out in preview in the first half of 2022.

‘As a company whose focus is on productivity, on knowledge workers, it’s something that customers are really asking us for, and it’s coupled with the vision of mixed reality that we’ve been working on for 12 years. It’s all coming together’, said Microsoft Technical Fellow Alex Kipman.

With the personalised avatars, Microsoft Teams users can ensure their presence in meetings without turning on webcams. They will be able to create and join a Teams meeting as a unique, personalised avatar. Other participants in the meeting might also be seen as avatars. Attendees can show themselves on video or use a static picture or bubble with initials. The avatar has options for customisation and can use Artificial Intelligence (AI) to imitate movements as well as gestures.

Likewise, organisations can build immersive spaces — their own metaverse — within Teams. Microsoft says Mesh for Teams users can take their avatars into these spaces to mingle, collaborate on projects, and experience those “serendipitous encounters” that spark innovation. None of this will initially need a VR headset. People can access Mesh on HoloLens 2, VR headsets, standard mobile phones, tablets, or PCs — using any Mesh-enabled app.

Mesh is built based on Teams features such as Together Mode and more that Microsoft says it has been developing to make hybrid working culture more productive. Mesh, was initially announced in March this year and is powered by Azure cloud computing systems. Microsoft’s push for metaverse comes after Facebook unveiled virtual chat rooms as part of its rebrand to name itself Meta.

Microsoft says it has joined hands with Accenture to create ‘Nth Floor’ using Mesh that works as a virtual campus for employees to gather for coffee, presentation, parties, and events irrespective of their locations. Currently, the new hires of Accenture meet together on Teams and receive instructions on how to create a digital avatar and access the virtual space called One Accenture Park.

This week on Orbital, the Gadgets 360 podcast, we discuss the Surface Pro 8, Go 3, Duo 2, and Laptop Studio — as Microsoft sets a vision for Windows 11 hardware. Orbital is available on Spotify, Gaana, JioSaavn, Google Podcasts, Apple Podcasts, Amazon Music and wherever you get your podcasts.