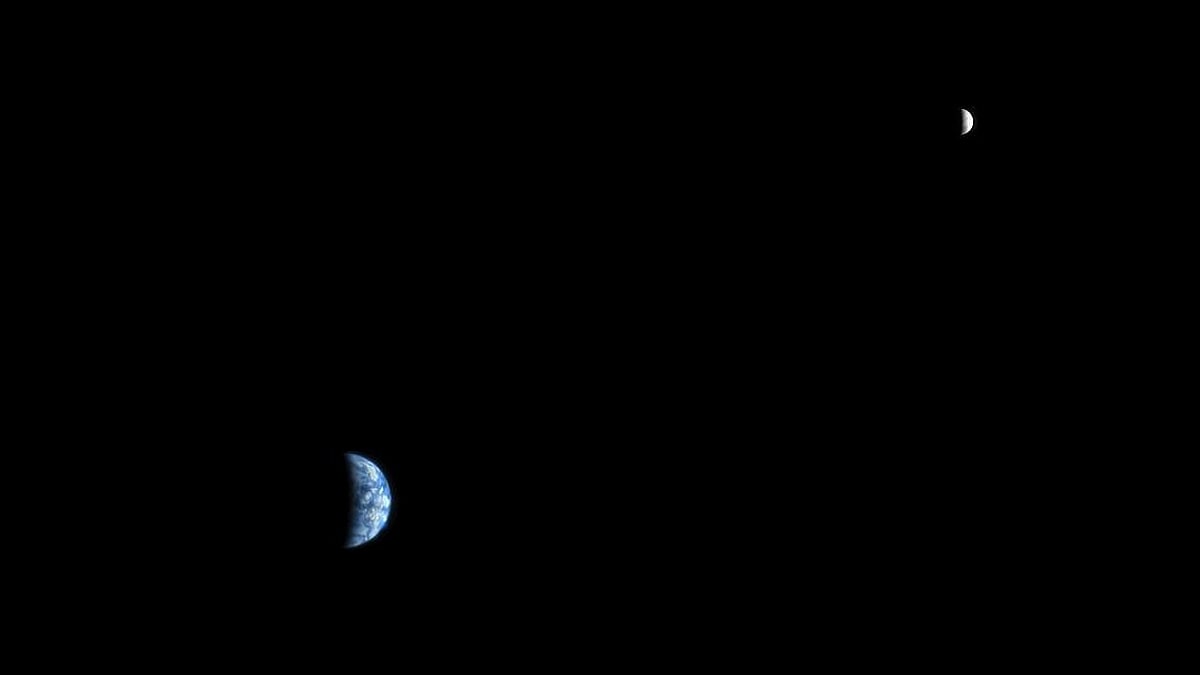 Ever wondered how the Earth and the Moon would appear when seen from a Martian orbit? NASA has shared an image that showed them together in a single frame. The image was caught by NASA’s Mars Reconnaissance Orbiter (MRO) when the Earth was 142 million kilometres from Mars. In the image, only the visible parts of the Earth and the Moon can be seen. While the Earth appeared in blue, the moon looked white against a dark, black canvas. The image was taken by MRO’s High-Resolution Imaging Science Experiment (HiRISE) camera, NASA said.

Although the image was taken in October 2007, it has been again shared by NASA this week. The US space agency said each of its seven missions currently exploring Mars, including the Perseverance and Curiosity rovers, is “really a NASA Earthling”. They act as the eyes of the scientists exploring the Red Planet. These robots also help deepen our appreciation for the Earth, the agency said.

Mars Reconnaissance Orbiter caught this glimpse of Earth and the Moon. Each of our seven robots now working at Mars is really a #NASAEarthling, acting as our eyes as they explore the Red Planet – deepening our understanding of and appreciation for our blue one. pic.twitter.com/7QaMBFoV9y

Although clouds are the dominant feature in the Earth image, it showed the west coast outline of South America at the lower right.

NASA said in a statement that at the time the image was captured the phase angle was 98 degrees, meaning that less than half of the disk of the Earth and the disk of the moon have direct illumination. NASA said the MRO can image Earth and moon at full disk illumination only when they are on the opposite side of the Sun from Mars. But there’s one problem: the range would be much greater and the image would have less detail compared to this one.

The Mars Reconnaissance Orbiter was launched in August 2005 and it was inserted into Mars orbit in March 2006. Its primary objective was to learn more about the Red Planet, including the history of water flows on or near the Martian surface. It has also been a key data relay station for other Mars missions.