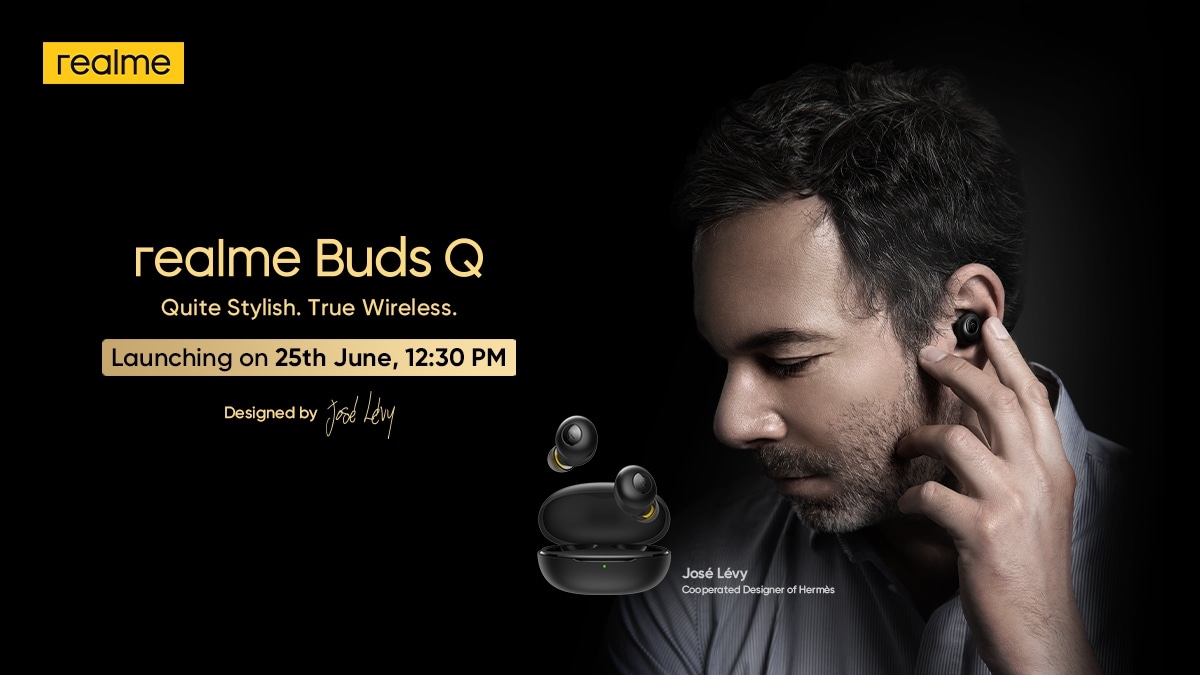 Realme Buds Q Truly Wireless earbuds will launch in India on June 25. The company has started teasing the arrival of the earbuds, and has confirmed availability on Amazon and Realme.com. The truly wireless earbuds were unveiled last month in China, and the Realme Buds Q are now launching in India next week. The wearable has been designed by popular designer José Lévy, and are touted to have the largest bass driver in its segment. They will be launched in India in three colour options.

Realme Link’s official Twitter handle posted a tweet confirming the launch of Realme Buds Q in India. The earbuds are launching on June 25, Thursday, at 12.30pm IST. They will be available on Amazon and Realme.com. As mentioned, it will go on sale in three colour options – Quite Black, Quite Yellow, and Quite White. Pricing and launch offer details should be announced on the day of launch.

Realme has published a dedicated page teasing the key features of the Realme Buds Q. The earbuds are placed inside a pill-shaped charging case. The buds are teased to be very light at just 3.6 grams. The company claims that the Realme Buds Q offer 66 percent more battery life than other top-selling models in the same segment. The earbuds are touted to offer 20 hours of total playback and 4.5 hour of playback on a single charge.

The Realme Buds Q has a 10mm large boost bass driver that claims to be 38 percent larger than other top selling models in the same segment. It is equipped with a new Gaming Mode that offers 119 milliseconds of Super Low Latency for better audio and video sync. The teaser confirms intelligent touch controls like double tapping the side will let users answer calls and play or pause music. Triple tapping it will play the next song, and pressing and holding one side will end the call. Pressing and holding both sides will let users enter Gaming Mode. The Realme Buds Q are also teased to be IPX4 water and dust resistant. Connectivity options include Bluetooth v5.

As these earbuds have already been unveiled in China, we know that the charging case supports 30W wired charging. The TWS earbuds do not support wireless charging.

Editor’s Note: This story has been updated. Realme earlier announced that the Realme Buds Q would be available on Flipkart, however this was an error from the company’s side. It is going to be launched on Amazon, Realme has now stated.

Is Realme TV the best TV under Rs. 15,000 in India? We discussed this on Orbital, our weekly technology podcast, which you can subscribe to via Apple Podcasts or RSS, download the episode, or just hit the play button below.

Hyundai to Buy Controlling Stake in US Robot-Maker Boston Dynamics From SoftBank in $1.1 Billion Deal