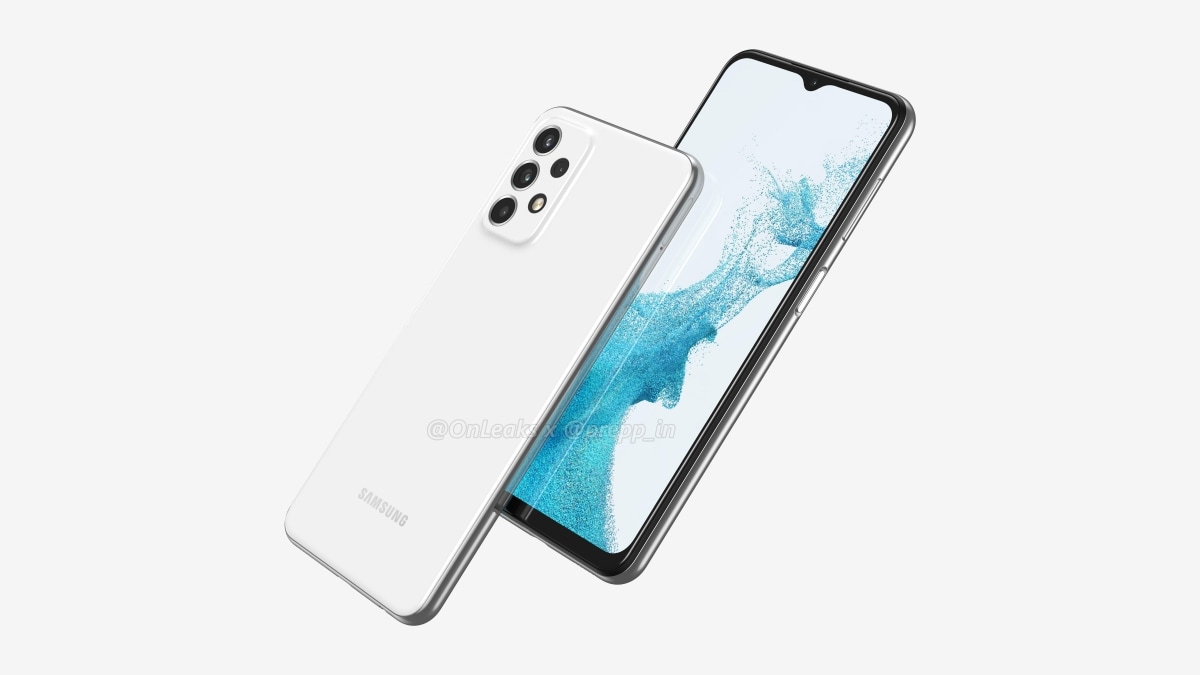 A report by tipster Steve Hemmerstoffer and Collegedunia states that the upcoming Samsung Galaxy A23 5G price in India will start at Rs. 21,990. The report mentions that the smartphone will launch in India on March 31. As per the renders, the Samsung smartphone will be offered in Black and White colour options. Since there is no official confirmation, the information should be taken with a pinch of salt.

As per the renders shared in the report, Samsung Galaxy A23 5G will have a design similar to Samsung Galaxy A-series smartphones from last year. At the back, the smartphone has a noticeable camera bump that houses the quad rear camera setup as well as the LED flash. The front houses a flat display with a waterdrop-style notch, thick bezels on three sides, and a thick chin, as per the renders.

Samsung Galaxy A23 5G’s renders show a fingerprint scanner that doubles up as the power button and volume rockers on the right spine. The left is shown to house just the SIM tray. The bottom is shown with a 3.5mm headphone jack, a USB Type-C port, and a speaker grille.

The dual-SIM Samsung Galaxy A23 5G is said to run Android 11 out-of-the-box. It will reportedly sport a 6.4-inch HD IPS LCD display. Under the hood, it may feature a MediaTek Dimensity 700 MT6833 SoC, paired with 6GB of RAM and 128GB of onboard storage.

For optics, the Samsung smartphone will reportedly feature a quad rear camera setup with a 50-megapixel primary sensor, an 8-megapixel ultra-wide-angle sensor, and two 2-megapixel macro and depth sensors — corroborating a previous report. For selfies, it may get a 13-megapixel sensor. The report mentions that the camera on Samsung Galaxy A23 5G will have features like digital zoom, auto flash, face detection, and touch to focus.

Samsung Galaxy A23 5G will reportedly feature an under-display fingerprint. Other onboard sensors include ambient light sensor, proximity sensor, accelerometer, and gyroscope, as per the report. Connectivity options are said to include 5G, USB Type-C, and a 3.5mm headphone jack. The smartphone is said to pack a 5,000mAh battery with 18W fast charging support. Samsung Galaxy A23 5G will reportedly measure 167.2×76.4x9mm with the camera bump increasing thickness to 10.3mm.