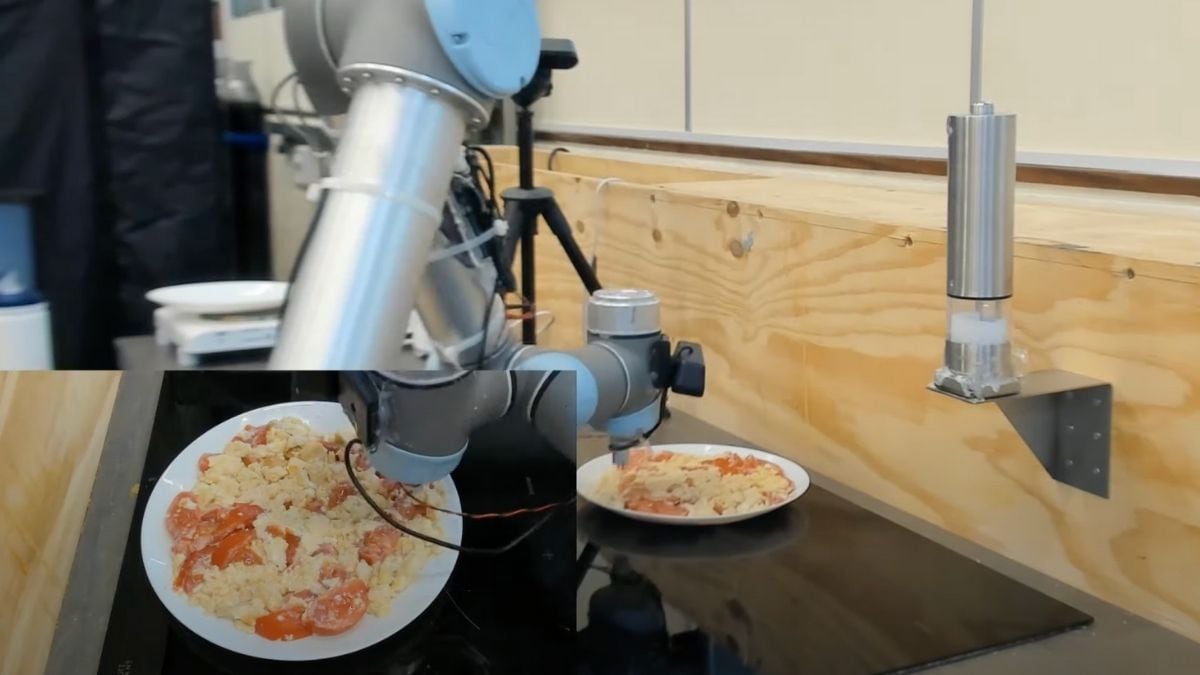 A robot “chef” is being trained by Cambridge University researchers to taste food and determine if it is adequately seasoned while cooking it just like a human. The robot is being trained to even develop the ability to alter the flavour of the food, based on the preferences of the user. So, does this mean that the human chef is on the verge of extinction as machines mimic the work they do, and, possibly, even become superior cooks? The robot chef was designed by Cambridge University researchers to taste a sample plate of scrambled eggs and tomatoes at various stages of chewing and grade the flavour.

At three separate stages of the chewing process, the robot chef tasted nine different varieties of scrambled eggs and tomatoes, producing “taste maps” of the dishes. The findings may aid the development of automated meal preparation by robots, by helping them learn what tastes good.

The findings were published in the journal Frontiers in Robotics & AI.

Researchers say that by mimicking human chewing and tasting processes, robots may someday be able to manufacture food that people will appreciate and that can be modified to suit individual preferences.

Grzegorz Sochacki from Cambridge’s Department of Engineering, the paper’s first author, said that most home cooks are familiar with the concept of “tasting as you go”, which involves checking a dish’s flavour balance while cooking. Sochacki added that it’s crucial for robots to be able to taste what they’re cooking if they’re to be utilised for certain aspects of food preparation.

The researchers discovered that this “taste as you go” approach considerably increased the robot’s capacity to judge the saltiness of the dish more rapidly and precisely than other electronic tasting technologies that only test a single homogenised sample.

Dr Arsen Abdulali, also from the Department of Engineering and co-author of the paper, said that the act of chewing delivers continual feedback to the brain while people taste the food. Abdulali added that they intended to mimic a more realistic chewing and tasting process in a robotic system, which should result in a tastier end product.

Readings from a conductance probe at various stages during chewing yielded taste maps for each dish. The researchers attached a conductance probe, which works as a salinity sensor, to a robot arm to mimic the human process of chewing and tasting in their robot chef. They made scrambled eggs and tomatoes with different amounts of tomatoes and salt in each dish.

The robot tasted the dishes in a grid-like pattern using the conductance probe, producing a reading in just a few seconds.

To simulate the textural change caused by chewing, the scientists blended the egg mixture and had the robot test the plate once again. Taste maps of each dish were created using different readings at different points of chewing.

Their findings revealed that robots were far better at assessing saltiness than other electronic tasting methods, which are generally time-consuming and only deliver a single reading.

The researchers hope to improve the robot chef in the future so that it can taste a variety of foods and improve sensory capabilities to detect sweet or greasy foods, for example.